Things To Do In Jerusalem Before You Die

Hey – it isn’t just about the holy places. There’s a lot more to Jerusalem than that.

For example, did you know that yesterday and today, (and hot on the heels of the UEFA Under-21s Championship, which has not yet finished) the Capital has been hosting our very own Formula One Road Show – The Jerusalem Peace Road Show – with star racing drivers from the Ferrari and other international racing teams. I mean – how ever did we manage to get by the past 3000 years since Jerusalem became the political and spiritual centre of the Jewish People without a Formula One race through our streets?

I know what you’re going to say. How can you possibly hold a Formula One race in a city that doesn’t even have a proper autostrada? But just consider. For years, the average Israeli driver has been convinced that each and every road is an autostrada  – and driven accordingly. Now we have official – if belated – confirmation of that belief ;-).

And let’s look at another plus. The BDS mob (no, that’s not Bondage, Domination and Sado-masochism, though you might be pardoned for thinking so) tried to stage a boycott of the event, (as they called for a boycott of the UEFA Under-21s Championship)  but – according to the Gulf Times – the attempt fell flat.

So my fellow Jerusalemites, sweltering in the midday heat while waiting for the bus that never came, because it was rerouted to make way for the Road Show, or plodding their weary way home on foot, or caught up in a seemingly endless traffic jam because of the closure of major traffic arteries to all but the competing cars (I knew I should have bought a Ferrari!) and telling themselves that we need a Formula One Road Show like we need a hole in the head, can take comfort – as I do – in the thought that, however frustrating it may have been for us, our enemies were even more frustrated.

And now for something completely different, as Monty Python used to say ;-).
Yesterday was the last night of the Light in Jerusalem 2013 Festival. I was there on Wednesday night, and, just as I was last year, I was entranced by the magical displays of light and shadow. I happened, in any case, to be in the Old City for the dress rehearsal of the concert my choir is giving next Sunday, in one of the Old City churches, and when we had finished, I wandered through the crowded streets with my camera. Although it was after 11 p.m., whole families, Jews and Arabs, were strolling through the streets enjoying the festival  – despite attempts by the Al-Aqsa Foundation to lead a boycott by Arab residents of the city. 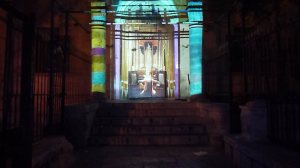 Also in Jerusalem – and throughout Israel – we are celebrating Hebrew Book Week which ends tomorrow night (Motzaei Shabbat). And, as happens every year, the news programmes and talk shows debate the perennial question: Are we still “the People of the Book”? Do our children still read books?

On the day Book Week opened,  Keren Neubach  hosted an interesting discussion on her morning news and interview programme on Israel Radio’s Reshet Bet . One of the interviewees claimed that kids these days no longer read books, they prefer the Internet, they prefer their play-stations, and they only read schoolbooks if they absolutely must. But another interviewee insisted that Israeli children and adolescents do read. They may not read what their elders would like them to read, and it may not be what we would call “reading” – they read comics, graphic novels, and fan fiction on the internet. But they do read. And not only do they read, but they write fan fiction and they respond to and add to, fan fiction written by their friends.  Which is to say, not only do they read, they also engage in creative writing. It may not be Shakespeare, Dickens or Jane Austen – but then, how many of us can write like Shakespeare, Dickens or Jane Austen? The point is that they do read enough to make them want to try their hand at creating something themselves.

A final note on this point: on the bus down to Yafo (Jaffa) last week to attend the orchestra rehearsal for the Jerusalem Oratorio Choir’s Mendelssohn concert which took place this past Sunday (June 9th), one of my fellow choristers was telling me that her son only reads reference books, which he needs for his studies – but her daughter is a bookworm, devouring books that come her way. So I think we shouldn’t be so hasty to write off the next generation of readers.

And now, it’s 6 p.m. here in Jerusalem. Shabbat starts in just over an hour and the Shabbat meal beckons.

Shabbat Shalom to you all – have a pleasant weekend.

Born in London, the UK, I came on Aliyah in my teens and now live in Jerusalem, where I practice law. I am a firm believer in the words of Albert Schweitzer: "There are two means of refuge from the sorrows of this world - Music and Cats." To that, you can add Literature. To curl up on the sofa with a good book, a cat at one's feet and another one on one's lap, with a classical symphony or concerto in the background - what more can a person ask for?
View all posts by Shimona from the Palace →
This entry was posted in Books, Daily Life, Humour, Modern Living, News, sport, Tourism and tagged BDS, Formula One, Hebrew Book Week, Jerusalem Peace Road Show, UEFA Under-21s Championship. Bookmark the permalink.

7 Responses to Things To Do In Jerusalem Before You Die