Posted on February 13, 2015 by Shimona from the Palace

A musical workshop in Caesarea last month, under the direction of the American choral conductor Robert Porco, is a case in point. The workshop, in which two other choirs participated, besides JOCC, focused on American choral music. 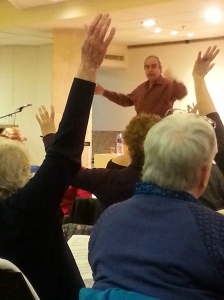 While we are not complete strangers to American choral music, it has taken a much more prominent place in our repertoire since the American-born Kate Belshé took over as our conductor. However, it is not about American music that I wish to write today, but about a little-known gem on the Israeli travel itinerary/cultural scene.

As I mentioned above, the workshop took place in Caesarea, a fairly quiet town on Israel’s Mediterranean coast. Caesarea is best known for its Roman antiquities, especially its Roman theatre, now restored and used for concerts. For a brief time, it was the scene of the Israel Opera Festival, before the latter event transferred to Masada. Golf aficionados will also be familiar with the town’s golf course – for many years, the only one in Israel. Fewer people, it seems (and I was, until last month, not one of the privileged few), know of the existence of the Ralli Museum there, one of five such museums around the world, established by Harry Recanati, a scion of the Sephardic Jewish banking family. The Ralli Museums, supported by the Recanati Foundation, specialise in Latin American and Spanish art and entrance to them is free. It was in one of the exhibition pavilions there, Ralli 1, that the workshop took place.

The works of art are displayed in buildings constructed in the Spanish colonial style, although many of the sculptures are displayed outside, in the grounds.

Some of the “sculptures” were created by Mother Nature, such as this tree trunk which appears to have one of its own wooden “arms” wrapped around itself, in a contorted embrace.

There are more sculptures inside, including works by Salvador Dali.
And how about this painting? Dali, or merely “Daliesque”?

Are the watchers looking at a lighthouse, a building on an island in the middle of a lake, or a Celtic cross?
By the way – I find the Siamese cat in the lower right-hand corner quite irresistible 🙂

One of the sculptures I particularly liked was this one, of a girl scrutinising her face in what I presume to be a mirror, although, at first glance, from a distance, I imagined her to be holding up a mobile phone, perhaps taking a “selfie” 😉 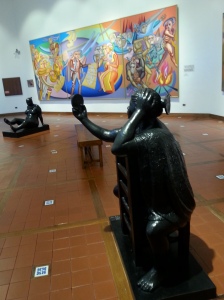 The room in which the workshop took place also contained some very attractive sculptures, including these two, which might be said to be four – since, in each case, they presented different faces, depending from which side they were viewed: 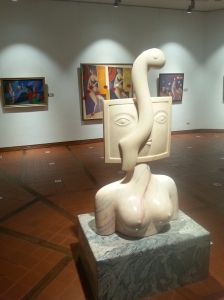 The main exhibition hall is constructed around a small central patio, so that one can look through the windows on one side of the central hall directly through to the exhibits on the opposite side, thus receiving the pleasing aesthetic of a picture within a picture – or possibly, a hall of mirrors.

Another interesting effect of the architectural design is the way it caused the sunlight to fall on some of the paintings like a spotlight. Some might consider this a disadvantage, but I rather liked it.

I would be the first to admit that I know next to nothing about Latin American art, so it is something of a pity that, due to the exigencies of the workshop, there was scarcely time to enjoy the museum. Nor did I note down the names and creators of most of the art there. However, I do know what I like, and what I liked was the vivid colours which typified so many of the paintings, even those depicting the most sombre of subjects. For example, many of the paintings dealt with the history of the Jews in Spain, the Inquisition and the Expulsion of 1492. 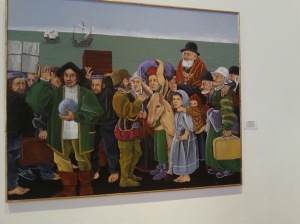 See, too, the explosion of vibrant colour in this huge wall panel. 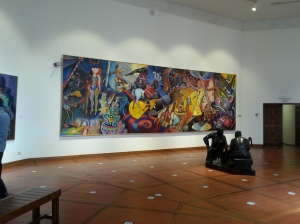 Many of the pieces depicted biblical scenes, such as this painting of Adam and Eve in the Garden of Eden.

I have heard that the Ralli Museums don’t have catalogues and don’t conduct formal tours, because the motto of their founder is that art should be enjoyed for its own sake. Lengthy explanations about style, artistic and social influences etc. would detract from the visitor’s ability to see the painting or statue with unbiased eyes. Be that as it may, I could not help but detect allusions in several paintings to earlier works of art, even though I am not sufficiently expert on the subject always to identify to what the artist was alluding.

This one, entitled “Levitation”, evokes Chagall, with his characters floating in mid-air – to my mind, at least.

Here, for example, is a religious scene which reminded me of something but I’m darned if I remember what!

It actually appears to include allusions to several different paintings and artists. The left-hand female figure, for example, reminds me vaguely of Botticelli, the seated figure next to her makes me think of Picasso, the haloed saint in the background seems to be a mélange of Byzantine fresco and modern African painting and as for the nude female on the right – it reminds me of something, maybe it’s the pose – I don’t know. Maybe the female nudes from “The Garden of Earthly Delights” by Hieronymous Bosch? Or one of Lucas  Cranach the Elder’s depictions of Venus? This one, maybe? 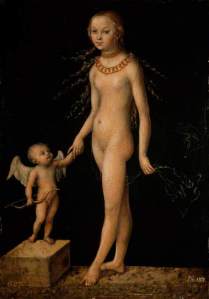 The following picture almost drove me crazy trying to recall where I had previously seen a painting of a female nude wearing a large black hat.

Here, it is the right-hand figure which seems to recall numerous paintings of nude women bathing. Rubens? Rembrandt? One of the northern European masters, at any rate. The black hat, too – it’s on the tip of my tongue. To what is the artist alluding?
I searched for hours on the internet until I found this painting, also by  Cranach the Elder:

I’m not sure that the artist was thinking of this painting, in particular. In fact, I’m not even quite certain that this is the painting that I myself was reminded of. Perhaps, after all, a guided tour, or at least, a catalogue, would have helped…

Well, there you have it, Dear Reader – my own completely random musings about a museum I might never have discovered, were it not for my musical activities with the choir. Anyone who recognises any of the paintings and can give me some information about them is cordially invited to do so. Likewise, I’d be interested to know if others see in the paintings what I saw. Please let me know.
In fact, even if you disagree with me, write and tell me. I don’t bite 😉

That’s all for now. I hope you’ve enjoyed this little virtual tour of a museum I would gladly visit again.

Shabbat Shalom. Have a pleasant weekend.

Born in London, the UK, I came on Aliyah in my teens and now live in Jerusalem, where I practice law. I am a firm believer in the words of Albert Schweitzer: "There are two means of refuge from the sorrows of this world - Music and Cats." To that, you can add Literature. To curl up on the sofa with a good book, a cat at one's feet and another one on one's lap, with a classical symphony or concerto in the background - what more can a person ask for?
View all posts by Shimona from the Palace →
This entry was posted in Art, Music, Tourism, Travel and tagged Harry Recanati, Latin American art, Latin American painting, Latin American sculpture, Ralli Museums, Recanati Foundation, Salvador Dali. Bookmark the permalink.