I can’t believe I let more than a month go by without posting anything! And now, I hardly know where to start.
I suppose I can do no better than to follow the King of Hearts’ advice to the White Rabbit: “Begin at the beginning, and go on till you come to the end: then stop.”

Technically, then, I must begin at the end of March, with the penultimate field trip in the “929 on the map of Israel” series which I am taking with Yad Yitzhak Ben Zvi. The previous field trip had dealt with the last days of the northern Israelite kingdom. The subject of this present trip was the Assyrian and Babylonian campaigns which eventually led to the fall of the southern kingdom, the Kingdom of Judah, to King Nebuchadnezzar.

Our first stop was at Tel Lachish, site of the ancient city of Lachish which was the second most important town in the Kingdom of Judah, after Jerusalem. Amongst the archaeological finds we saw there was the Assyrian siege ramp:

And, of course, the city walls:

And the royal palace (you have to use your imagination a bit for this):

We know about the siege and conquest of Lachish by the Assyrian king Sennacherib, not only from the Bible but also from external sources such as the set of alabaster panels which completely covered the walls of one of the rooms in Sennacherib’s palace at Nineveh. Excavated in the 1840s, by the Englishman Henry Austen Layard, the Lachish Relief is now on display in the British Museum. Possibly the great importance which Sennacherib evidently ascribed to the capture and sack of Lachish is indicative of a natural wish to gloss over his failure to capture the capital city of the Judean Kingdom – Jerusalem.

With the decline of the Assyrian Empire, the city was rebuilt, but later fell to the Babylonians.

Of the siege and destruction of the city at the hands of the Babylonians in 587 B.C.E. we have the evidence, not only of the Bible but also of the “Lachish Letters“. These were discovered in what was, apparently, a guard house (the ruins of which can be seen in the picture below), in which  the writer was held pending trial. They were preserved, it is believed,  because they were supposed to serve as evidence, either for the accused or against him.

Most of these, too, are to be found in the British Museum, although some are in the Rockefeller Museum in Jerusalem, including letter #4, in which the writer states: “we are watching for the fire signals of Lachish according to all the signs which my lord has given, because we cannot see Azeqah.”
We are told in the Book of Jeremiah 34:6-7 that Lachish and Azeqah were the last two fortified towns to fall to the Babylonians before the overthrow of Jerusalem itself, and it is chilling to think that while the writer’s failure to see Azekah might merely be indicative of his position, in a place from which Azeqah is not visible, it is more likely that the meaning behind his words is that the watch-fires of Azeqah have been extinguished, because the city has already fallen.
How poignant it is today, to see the ruins of this once powerful city, now covered with wild flowers. 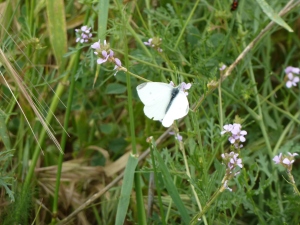 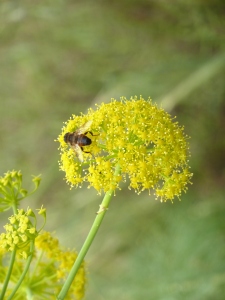 Our next stop was Khirbet Qeiyafa, which some archaeologists believe is the biblical Sha’arayim (lit. “Two Gates”), because the circular city wall has two gates, whereas usually, contemporary sites had only one gate.

Controversy reigns as to whether or not this was an Israelite site (as at the Beit Shemesh site, no pig bones were found, indicating that the town’s inhabitants refrained from eating pork products) and whether or not it existed as early as the time of King David (see the Wikipedia link for a fuller discussion of these questions). It has even been claimed that one of the structures found was King David’s palace. At all events, it is important to the discussion as to whether or not the Israelite kingdom was anything other than a small, tribal entity, rather than the force to be reckoned with which is described in the Bible – a kingdom of sufficient importance for neighbouring kingdoms, such as Egypt and Sidon, to link themselves to in diplomatic marriages, or to seek as an ally against such threats as Assyria.

From Khirbet Qeiyafa, we returned to Jerusalem. The Assyrians never conquered Jerusalem, perhaps due to her massive fortifications, some of which – such as the Broad Wall (seven metres in depth) –   can be seen beneath the present-day Jewish Quarter.

The Assyrians could not prevail, but Jerusalem’s massive  towers, such as the one below, failed to defend the city against the Babylonians, more than a century later.

At the foot of the tower, many arrowheads were found, evidence of the desperate, last ditch struggle which ended with the fall of the Judean capital and the Babylonian exile.

A happier subject is the Jerusalem Oratorio Chamber Choir’s joint project with the Bel Canto Choir (another of the five choirs making up the Jerusalem Oratorio Choir) and with the Ashdod Symphony Orchestra, conducted by Maestro Vag Papian. Although the timing was rather awkward (Tuesday, April 19th) – just three days before the start of Pessach) – it was in some ways a welcome respite from the burden of Pessach cleaning. Several weeks of intensive rehearsals, first each choir separately, with our own conductors (Kate Belshé for the Chamber Choir, Salome Rebello for Bel Canto), then both choirs together, culminated in two joint rehearsals with Maestro Vagian. The first was on the Sunday, April 17th, with piano accompaniment only. The second, the following day, was with the orchestra,  both choirs and the instrumentalists having to crowd into the lecture hall/banqueting room at the Jerusalem YMCA. This was definitely something of a squeeze, and, after we had finally managed to arrange enough chairs to accommodate all of the choir, Maestro Vagian decided he needed to change them all around! I didn’t think there would be room for everyone, but Israel is, after all, the land of miracles 😉
It was not until the day of the concert that we were able to have a relatively short rehearsal in the auditorium itself. The YMCA auditorium was, until the inauguration of the Henry Crown Symphony Hall in the 1970s, the home of the Jerusalem Symphony Orchestra, but the stage there is relatively small. For this reason, instead of being placed behind the orchestra, as we usually are, the choir was ranged along the two sides of the stage, with the happy result that I found myself behind the first violins instead of – as usually happens – somewhere between the brass and the percussion!

I always enjoy the first rehearsal with the orchestra, when all the hard work of the previous weeks starts coming together. Some people find the sound of an orchestra tuning up to be a mere cacophony. To me, it’s an adventure, a promise of something wonderful to come.

It was after the break, mid-evening, as I was settling back in my chair, that one of my fellow sopranos murmured in my ear: “Did you hear about the terrorist attack?”
No, as it happened. I had not! What attack? Where?
Thank heavens for smart-phones. Mine informed me that a bomb had exploded in an empty bus, and that a few people in adjacent vehicles had been lightly wounded. That’s almost always how it goes. At first, you hear that there were only one or two lightly wounded. Then the gory details begin to pile up, whether it’s the number of casualties, or the extent of their injuries.
After the rehearsal, when I got home and switched on the television, more details emerged. Like the fact that the bus in question was a no. 12, one of the buses which serves my own neighbourhood. And the fact that 21 people had been injured and that two of them were in critical condition. One of these turned out to have been the terrorist, who had apparently not intended to detonate the bomb so early, when the bus was still empty. At any rate, although doctors did their best to save his life (what for?), he died a couple of days later.  Good riddance to bad rubbish.
Hamas eventually claimed responsibility for this attack.

The concert the following day did much to improve my mood. It was an evening devoted to three of the great German Romantic composers  – Mendelssohn, Schubert and Brahms. The evening started off with Mendelssohn’s Third Symphony (the “Scottish” Symphony), here performed by Mendelssohn’s own Gewandhaus Orchestra.  This was followed, after a short break, by Schubert’s Mass no. 2, in G-Major.

Here, you can see the Sanctus section of the Mass, filmed by my brother on his camera phone:

The last item of the evening was Brahms’ Schicksalslied – the Song of Destiny – a beautiful piece which, incredibly, I had not known before. Here is an excerpt – once again, filmed by my brother on his camera phone.

Nor was this the end of that week’s musical delights, for on the Thursday (the day before the Seder Night), I travelled down to Tel Aviv to see the opera Romeo et Juliette by Gounod. You all know by now how I hate “modernistic” opera productions, where the plot is updated to the present day, the characters dressed in overalls or leather jackets and the action transferred to a Soviet munitions factory. I was relieved and delighted to see that this Romeo et Juliette was a traditional production, with beautiful, colourful costumes as well as melodious, lyrical singing:

I also loved the exhibition in the lower lobby – a series of amazing cakes made of sugar icing and all inspired by ballet and opera. 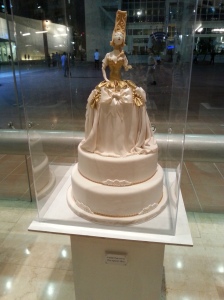 The very next evening, the Seder night ushered in the Pessach holiday, with the traditional meal, at the home of my father and stepmother. The weather, being unusually warm for this time of year, made it possible for us to sup outside, in the garden.

Pessach is now behind us, and in a few days, we shall be celebrating Yom Ha’Atzma’ut – Independence Day. In the meanwhile, the last field trip in the “929 on the map of Israel” also came and went – but I shall leave that for another occasion.

One last word. Even as I write these lines, news is breaking of yet another cowardly “Palestinian” terrorist attack – this time, on a group of elderly ladies who were taking their morning constitutional on the Armon Hanatziv Promenade. Two masked thugs came upon these senior citizens from behind and attacked them with knives, moderately wounding two women in their seventies.

I will keep you posted.

Born in London, the UK, I came on Aliyah in my teens and now live in Jerusalem, where I practice law. I am a firm believer in the words of Albert Schweitzer: "There are two means of refuge from the sorrows of this world - Music and Cats." To that, you can add Literature. To curl up on the sofa with a good book, a cat at one's feet and another one on one's lap, with a classical symphony or concerto in the background - what more can a person ask for?
View all posts by Shimona from the Palace →
This entry was posted in Archaeology, Art, History, Music, News, Tourism, Travel, Uncategorized and tagged Assyrians, Babylonians, German Romantic composers, Israel, Jerusalem, Jerusalem Oratorio Chamber Choir, Lachish, terrorism, Vag Papian. Bookmark the permalink.

2 Responses to A Very Busy Month