Grecian Getaway – Day 7: All Good Things Must Come to an End

Posted on November 3, 2019 by Shimona from the Palace

The following day was to be the last of our tour.  After breakfast, we loaded our suitcases onto the bus and set forth for Veroia or Veria. Here, too, there was a Jewish community as early as the 1st century CE (possibly earlier), to which the Apostle Paul preached (Acts of the Apostles 17, 10). In the New Testament, the town is called Berea.  Our first stop was the synagogue, which is no more than 200 years old, but which, tradition has it, was built on the site of the same synagogue where Paul is supposed to have preached and is thus of interest to Christian visitors. For Jews, however, it has more recent, tragic associations.

There were about 600 Jews living in Barbouta, the Jewish Quarter of Veria, at the start of World War 2.  In May 1943, the occupying Germans locked up some 424 of them in the synagogue, where they were held for three days without food or water, before being deported, first to Thessaloniki and thence, to Auschwitz.  None of them survived.
136 Jews escaped deportation by fleeing to the mountains and joining the Resistance. 123 returned after the war, to find their homes occupied by Greek Christians. Most of the survivors left Greece, for Israel or the United States. 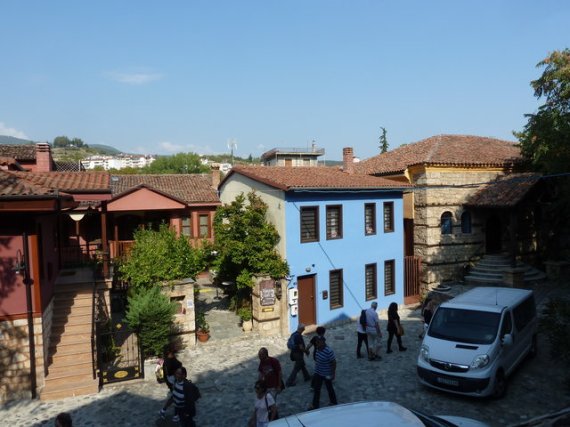 There are no longer any Jews in Veria, but a handful of non-Jews are determined to keep alive their memory. One whom we met, quite by chance, outside the synagogue was the operatic soprano, Sonia Theodoridou, herself a native of Veria, seen here with Yours Truly, on the steps of the synagogue. 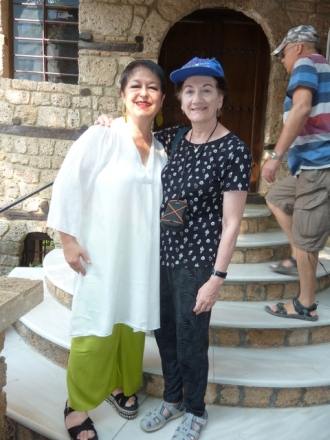 Sonia related to us how she had come to learn the tragic history of the Jews of Veria and how she was determined to see the memory of that history preserved – a promise on which she made good this autumn at the Thread of Memory event.

We wandered through the picturesque streets of the Jewish Quarter, where many houses still bear evidence of their original inhabitants, such as Hebrew inscriptions: 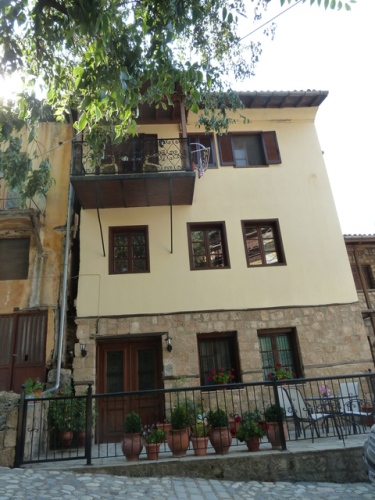 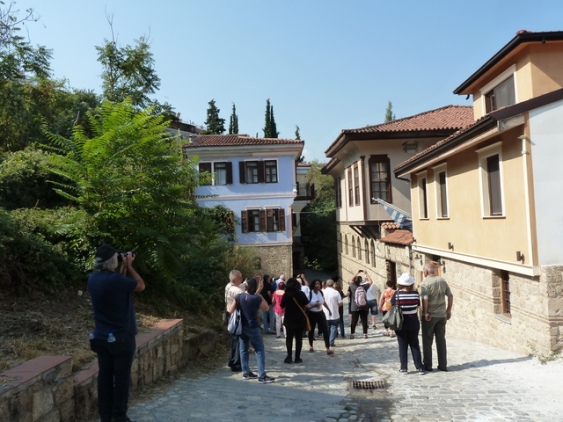 This inscription, for example, reads:  “If I forget thee, O Jerusalem, may my right hand forget its cunning”, together with the Hebrew date 5619 (equivalent to 1858/59 CE). 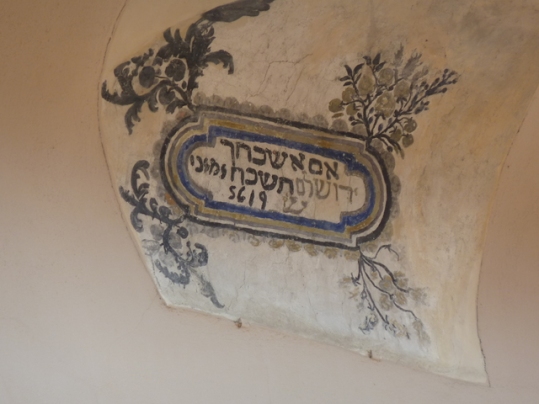 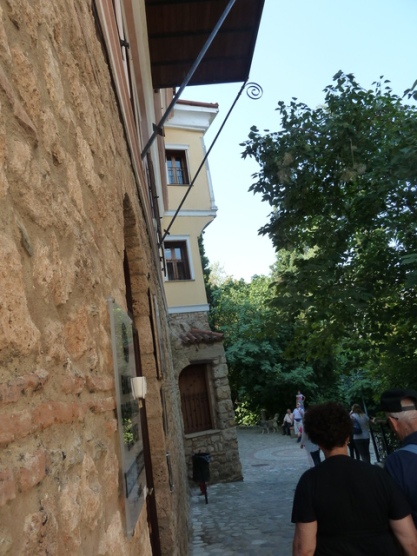 The river Tripotamos runs through the town, although it is more like a stream than the river its name (meaning “three Rivers”) would suggest. 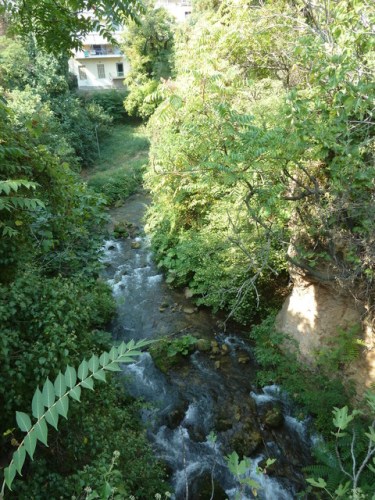 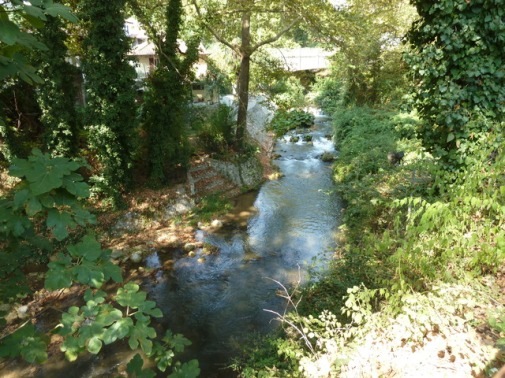 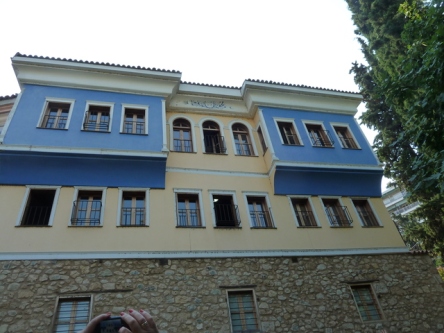 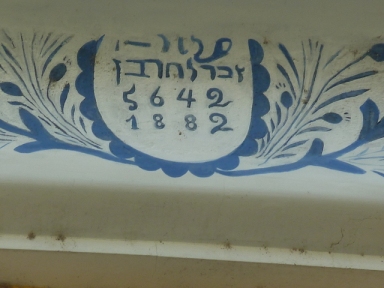 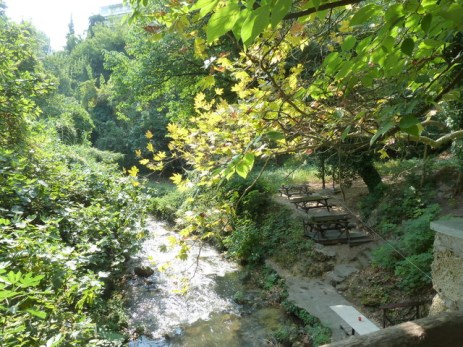 Another non-Jew helping to preserve the memory of the Jews of Veria is a local teacher and lay-preacher whose young daughter, Efgenia, impressed us all by reciting, in Hebrew, the lineage of all the Kings of Israel and Judah and who, when we took our leave, joined us in singing the Israeli National Anthem, Hatikvah (The Hope).

Next, we headed for nearby Vergina, (or Aigai, as it was known in ancient times), site of the tomb of Philip II, father of Alexander the Great, founder of the Macedonian Empire.
The unlooted tomb was discovered and excavated in 1977 by the Greek archaeologist Manolis Andronikos, and a museum complex was constructed around it, in the shape of an ancient tumulus, so that entering the museum is like entering a tomb. Photography is forbidden in the museum and while, left to my own devices, I would probably have disregarded the prohibition, we were accompanied by an official guide, which made it much more complicated. He was, I must say, a very good guide, who took us round all the important exhibits and explained everything in such a way as to bring it all to life.

Some of the exhibits, such as the golden wreath-like crowns which adorned the heads of Philip and one of his wives, were quite exquisite. There were also gold-threaded burial shrouds, jewellery, weapons and armour, including King Philip’s ceremonial shield, cooking implements, eating and drinking utensils, statues and figurines, all wonderfully preserved.  And, most important of all – the tombs themselves – not only of Philip, but also of his ill-fated grandson, Alexander IV, son of Alexander the Great and the Sogdian princess Roxana.  The young prince, rightful heir to his father’s kingdom, was murdered together with his mother by Cassander, who had married Alexander the Great’s half-sister Thessaloniki (after whom that city is named) and who seized the throne of Macedon for himself.

Since, as I said, visitors are not permitted to take photographs in the museum, Here is part of a BBC documentary programme about it the discovery of the tomb, its relics and their significance:

For the archaeology buffs among you, here is a link to a full length documentary about the ancient tombs and the relics found there.

As we had a plane to catch at 6:50 p.m. it was now time to head back to Thessaloniki, enjoying some last views of the beautiful Macedonian countryside on the way. 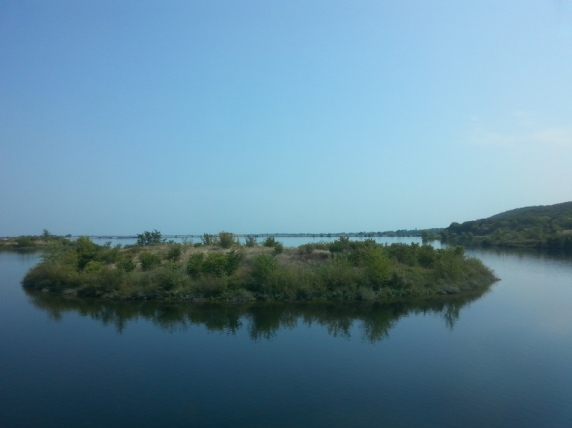 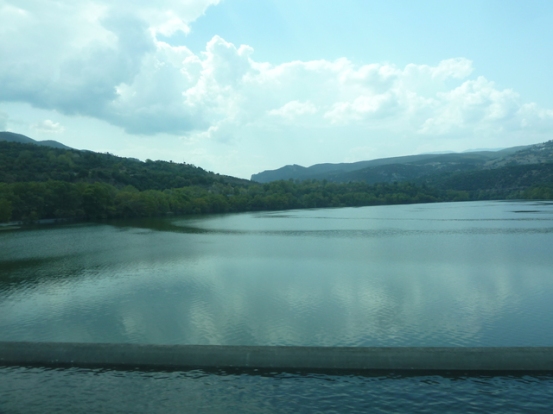 After a very late – but very necessary – lunch in the food hall of one of the city’s largest shopping malls, we headed for the airport.
It did not take long to complete the formalities of check-in, security, and passport control.
The flight home was short. However, because I had relied on another member of the group who lives in my neighbourhood, who swore she could get us a taxi home for no more than 200 NIS, I had not made arrangements with my usual taxi driver, who would have done it for 250 NIS.

Big mistake.  All the taxi drivers at the airport wanted between 320 – 350 shekels. After what seemed like an eternity, we found one who was willing to take “only” 300 shekels.

I got home shortly before midnight.

Did I go straight to bed? By no means. My cats had strewn litter all over the place and I could not – absolutely could not – go to bed before cleaning up a little bit, at least.  After that, I thought I might as well at least start unpacking my suitcase. Consequently, it was nearly one o’clock before I retired, exhausted, to my bed, where I fell asleep almost immediately.

Born in London, the UK, I came on Aliyah in my teens and now live in Jerusalem, where I practice law. I am a firm believer in the words of Albert Schweitzer: "There are two means of refuge from the sorrows of this world - Music and Cats." To that, you can add Literature. To curl up on the sofa with a good book, a cat at one's feet and another one on one's lap, with a classical symphony or concerto in the background - what more can a person ask for?
View all posts by Shimona from the Palace →
This entry was posted in Archaeology, History, Photography, Tourism, Travel, Uncategorized and tagged Alexander the Great, Holocaust, Philip II of Macedon, Sonia Theodoridou, Vergina, Veria. Bookmark the permalink.

2 Responses to Grecian Getaway – Day 7: All Good Things Must Come to an End